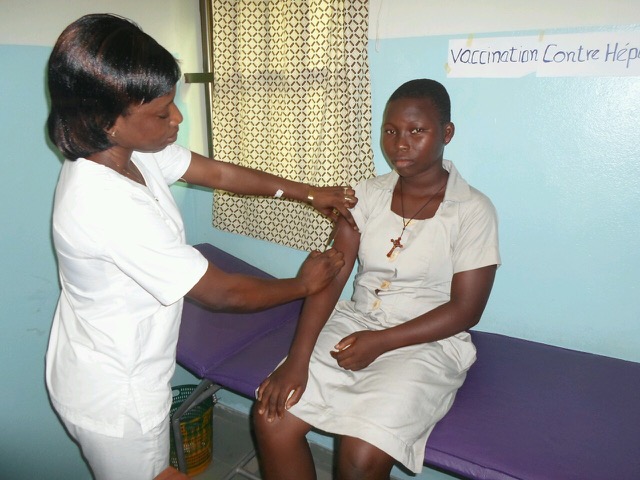 In the meantime we could achieve, together with our local partner organizations, that the Republic of Bénin

The project against hepatitis B will therefore be continued, but the focus will be on information and prevention, especially for risk groups such as pregnant women and medical staff.

From 2014 – 2020, we could reach around 10,000 children and young people with information campaigns about the risks and prevention of hepatitis B and C.

A total of more than 850 people have been examined since 2015, of which more than 620 children and adolescents and 30 pregnant women have been vaccinated.

From November 2015 the following orphanages and orphans have been looked after:

70 children and adolescents were vaccinated during the 2015, 2016 and 2017 World Hepatitis Days. The others were cared for in the following centers: In 2017, 78 children in the Ko-Koumolou school and ten children in Djeffa village were examined and vaccinated.

In 2016 we were able to carry out two large projects (examinations, vaccinations) in May / June:

ABOSCHVi has organized the following actions for World Hepatitis Day 2016 :

Bénin Santé has futhermore sponsorized 20 checks for screenings and vaccinations.

28.7. Conference in Cotonou – the Ministre of Health and a representant of the WHO being present

3.8. Presentation of actions against Hepatitis and the pladoyer to the cabinet of the Minstry of Health